Besides high power and mileage vs. low weight, one of the benefits of owning a car with a turbocharger is having full power at high altitudes. In fact, this solved the aviation world’s altitude problem, starting in the 1920’s and blooming during WWII. By 16,600 feet, atmospheric pressure is half that of sea level. Superchargers had initially tackled the altitude problem, but they use crankshaft power to run the charging unit. A turbocharger uses exhaust pressure to drive the charger, which yields far lower fuel requirements and lighter weights. For altitude comparison with cars, figure about a 25% power loss by Lake Tahoe at 6225 ft with a naturally aspirated engine, but full power with just a bit more turbo lag with a turbocharged engine.

To qualify and quantify that turbo lag issue, when a turbocharged intake system spools up, a certain amount of time is required to increase the pressure in the whole intake system. The act of compressing air increases the temperature in two manners. First there is Boyle’s Law. Everybody remembers PV=NrT, right? At the pressure increases, the temperature (in °Kelvin) increases to the same degree. Then there is an efficiency scalar that describes the amount of temperature increase versus the pressure increase for every type and model of charging device, called the “r” factor. Think of this as if the air is getting stirred or beaten by the blades of the charging device, egg beater style. The more the device thrashes, the more energy imparted and thus the temperature increases. Old school turbos from the 1970’s and early 1980’s ran pressures around 1/3 to 1/2 bar (5 to 8 psi), and did not increase the pressure/temperature enough to require an intercooler. In general, they had about 2 to 4 seconds of turbo lag from “floor it” to full power. And full power required revving up well over 2000 rpms. The next generation had better turbos, but needed intercoolers as the pressures developed were 14 to 18 psi. Full throttle and high speed conditions could cause turbo outlet air temperatures to approach 200 °F. Intercoolers were required to lower the temperature and increase the air density. The heat could cause thermal damage and even detonation. The lower air density means less oxygen to burn fuel. Turbo lag was still 2 to 3 seconds, but better power. 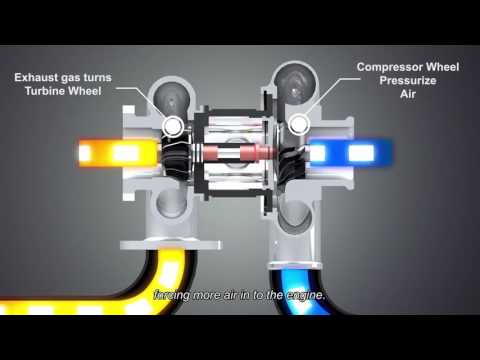 A YouTube Video by Auto Tech which clearly illustrates how a turbocharger works. Pardon the funky computer voice, but it is the best graphics.

Modern turbochargers from this century come in two different types, depending on the wastegate design. Gasoline engine turbochargers still have the original “toilet seat” wastegates, essentially just a vacuum diaphragm attached to a flap that lifts off a hole to bypass the exhaust turbine as the intake pressure comes up to specification. The turbo lag has been reduced to 1 to 2 seconds. Most diesels however use a VNT or Variable Nozzle Turbocharger design. Instead of a toilet seat for a wastegate, there are 9 or more small vanes which look like tiny long water drops that surround the exhaust turbine. They are mounted on pivots on a rotating ring. The ring rotates in response to the vacuum diaphragm. As the ring rotates, these vanes change angle to direct the exhaust flow, controlling how much exhaust pressure is exerted on the turbine wheel. As the vanes turn parallel to a tangent to form a circle, full exhaust pressure is on the turbine. As the vanes angle towards the turbine, turbulence reduces exhaust pressure, controlling the turbocharger speed. The beauty of this system is that full boost pressure can be reached in well under 1 second in most systems. In some systems, at sea level, full boost is achieved in around 1/4 to 1/3 of a second. 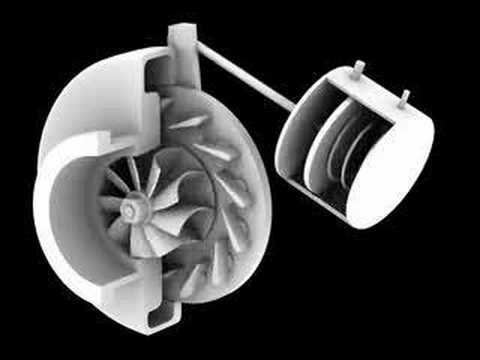 A YouTube Video showing the basic function of VNT turbocharger vanes. In our fleet, vacuum would be applied to the right side of the diaphragm where the spring is located.

One might well ask why these VNT turbochargers are not on gasoline models. The answer lies in material science. Anyone with a modern gas turbo car who drives a bit hard at night, then opens the hood, knows that a modern gasoline turbocharger runs hot enough to glow red hot, orange hot for really brisk drivers. The VNT assemblies just cannot take these temperatures, yet.

Most turbochargers fail for wear due to poor lubrication. Despite what the vehicle manufacturers say, the 10,000 mile oil change policy since 2005.5 inevitably causes turbocharger failure between 150,000 and 200,000 miles. Failure happens even earlier for those who use more power or skip oil changes. The problem is approximately the same between gas and diesel models. Oil seepage from the turbo boost pipes is generally an indication that the turbo has some wear, although a worn engine or one type of breather (PCV) problem can also lead to the same condition.

Rarely we find a turbo with Foreign Object Damage, termed FOD in turbo lingo. This includes anything from a slight ding to complete turbine or impeller failure, and/or broken shaft. Slight damage can cause the turbo to wail like the cops are pulling you over. A diesel engine can have an ancient glow plug break off and damage an exhaust turbine, sometimes completely breaking it. Old and crystallized plastic breather parts can suck into the intake impeller wheel.

Mark IV diesels from 1999.5 to 2005 have a few failures related to the turbocharger boost controls. The boost control solenoid (N75) leaking rapidly can cause overboost. Low boost, also called underboost, can be due to low vacuum pump outlet vacuum due to a loose fitting, the solenoid clogged or failed, vacuum line failure and wastegate diaphragm failure.

Mark IV diesel VNT turbos get varying overboost conditions due to sticking and/or worn VNT vane assemblies. Often the computer responds by setting a code and restricting boost to about 40% to attempt to save the engine. Any issue that happens perpetually every day requires turbo replacement. Intermittent issues need the boost level graphed. Slight overboosts may be dealt with with a Malone Tuning stage that simply allows slight overboost without cutting power.

Mark V diesel VNT turbos from 2005.5 to 2007 can have the same issues as the Mark IV, but another oddity shows up rarely. The Turbocharger VNT vanes can stick in the initial released (no boost) position and cause the engine to pour out excessive fuel. One sees a black cloud of wasted fuel and hears extreme nailing. Nailing is the diesel equivalent of detonation in a gas engine. The extremely incorrect engine load signals can cause damage to the DSG transmissions if so equipped. The two clutches can fight each other during shifting, making a banging noise and causing both dual mass flywheel and clutch pack failure. Testing turbocharger readiness will show an abnormally high boost increase well above the specification of 100 – 150 millibar rise. Although a difficult job, turning the lower stop adjustment clockwise will get rid of the problem. Rotate the adjustment about 1/2 turn clockwise for every 100 millibar that the reading is above normal specification. Or one can replace the turbocharger.

VW and Audi 2.0 T gasoline turbochargers from 2005.5 onward have a string of diverter valve failures, which are the overboost limiters on the intake side of the turbocharger. Each new diverter valve design has had it’s own failure mode. The turbochargers themselves have a unique failure of the wastegate assembly due to the fact that the metal wastegate seat comes loose in the cast steel exhaust housing. Exhaust gases then leak around the loose seat and as the seat sinks into the housing, the non-adjustable rod starts to hold the wastegate open. This problem coincides with hard driving. The metallurgy just is not up to the task of orange hot turbochargers.

A quick word to the wise from the past: Always let your turbocharger cool off after hard usage. Especially here in California, exiting the freeway on a triple digit day and immediately shutting down a turbo engine may eventually cause warpage and early failure. Few vehicles have an Exhaust Gas Temperature Gauge (EGT), and the factory provides no manner of knowing how hot your turbocharger may be. Suffice to say just a few minutes of low speed driving and/or idling is sufficient to cool off your turbocharger.